Jackson is a shy kid, when meeting new people or in new crowds he tends to hide behind Mommy or Daddy. Even if he’s met the people before but doesn’t see them frequently he tends to hang back not wanting to say, “hi” or give a high-five until he’s ready. And I respect that. I get that. But other people don’t always.

Over Christmas there was an incident with an Aunt who he see’s twice a year. She came in all excited, wanting hugs, and kisses and pushing presents at him. He cried.

Last week we met up with John’s Aunt, Uncle and cousin for dinner while in Disney World. We picked an Irish Restaurant that everyone loved. But I was worried about Jack. It had been a long week of running around the parks and last time we dined at that restaurant he had a belly ache the moment we sat down to eat. I was worried that the new people and the bad memories were a recipe for disaster.

We sat at a table near the stage where Irish dancers and musicians performed in front of the large, crowded restaurant. Jack covered his ears at first but then when the dancers came out he asked to have his high chair moved so that he could have a better view. In between bites of fish he watched the musicians and the dancers and clapped along to the music.

My husband was thrilled that Jack was enjoying the Irish music.

During dinner, Jack said to me “Mommy, I want to go up there” pointing to the stage.

“Honey, you can’t, the dancers are performing” I replied and he understood and went back to watching.

As we were getting up to leave he said it again and again I told him we couldn’t. And then I saw one of the dancers leading a little girl to the stage. I said to her, “Can he go too?”

“Sure” she replied taking Jack’s hand and leading him up the stage.

And I held my breath.

Thinking that he would come running back to me or to his Dad or grandparents. And as I watched him walk out on the stage I ran to the front so that he could see me. There he was, my little 3 year old, on stage in front of a restaurant full of people. With the stage lights shining on him, it was if that shy kid from an hour ago had disappeared. He listened as the dancer taught the steps and followed along smiling the whole time. He took the little girls hand and danced in a circle with her. He kicked his feet and took a bow at the end.

And I exhaled. He was fine, he was happy, he was my little boy and in that moment I could not have been more amazed and more proud. I looked at John and knew he was thinking the same thing. We smiled for the rest of the night the three of us.

And I realized that one of the joys of this crazy parenting ride is that no matter how well we know our kids, no matter how much we think we know there quirks and limits and fears and desires, that they always find a way to surprise us. 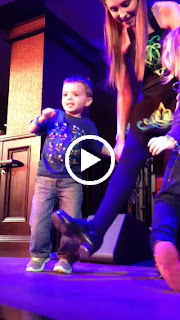 The video moves faster than he did. : )

This site uses Akismet to reduce spam. Learn how your comment data is processed.

Learn more about me →